November and December 2017 brought cooler temperatures but lots of fun and new opportunities.

My mom and step-father (Noni and Popi) came to visit and stayed on the boat with us.  We took a day trip to NYC with them on one of John’s days off.  We parked in the Bronx, walked to the subway station, and rode the subway into Manhattan where we walked and walked and walked.

Glass stairs on a NYC street

We had a quick lunch at Grand Central Station, walked around Chinatown, had a sweet treat in Little Italy, and briefly visited Times Square and the M&M store.

Liam at the M&M store 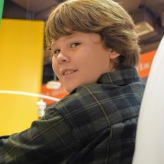 Glen at the M&M store 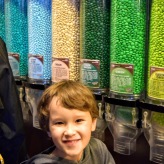 Erik picking out a treat

It had rained while we were in the city, but that didn’t stop the NYC Marathon from taking place.  We briefly saw Central Park as we watched the runners.

We were happy to head back to the Bronx on the subway as we were tired from all the walking.  Noni and Popi would spend part of their visit in NYC to celebrate their 20th wedding anniversary.

Erik getting ready to hop on the train 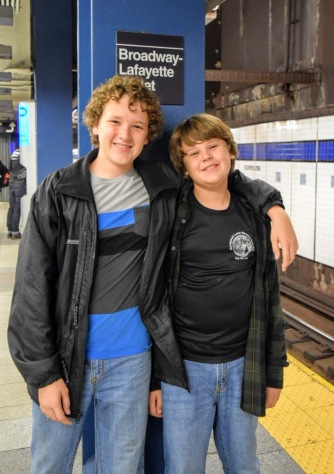 Liam and Glen in the subway station

Noni and Popi after a day in NYC

While Noni and Popi were visiting, the temperatures dropped dramatically.  We started using our space heaters and electric blankets consistently.  We purchased a dehumidifier to take care of the excessive moisture in the boat that was hanging off the ceilings and dripping down the walls.  It only took 24 hours of running the machine and things were already starting to dry up nicely.

We found a homeschool playgroup that was kind enough to change their meeting day from Wednesday to Tuesday so that we were able to join in on the fun.  We met at a nearby park where there was a play structure, an open lawn, and many many trees including the giant tree/tree cave pictured below.  The boys had a great time and we continued meeting with the group for our entire stay in Connecticut.

Through a Facebook homeschool group, we learned about something called Yale Splash.  It was a day long program where the older boys could attend classes of their choosing at Yale University.  We had fun picking out the classes and were lucky enough to get all the boys classes together.  Some of their classes included a class on world domination (similar to playing the game Risk), origami, trains, and a whodunnit class.  Pizza was provided for their lunch.

The whole family drove to New Haven on the morning of the classes.  It was incredibly cold and windy this particular day.  I went with the boys to check-in.  After getting their name tags, I walked with them to their first class which was across campus.  We were popsicles by the time we got there, but the building was nice and warm.  I left the boys there with a growing number of students and a cell phone with instructions to text me photos throughout the day.

John, Erik, and I went across the street to the Yale Peabody Museum while the boys were in class.  Erik had a blast seeing all the fossils and artifacts.  Since the classes lasted all day, we were able to catch a movie and eat lunch as well.  We decided to see Murder on the Orient Express.  Erik still talks about his time spent with us to this day. 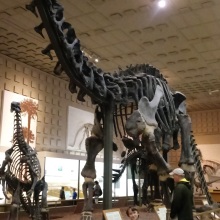 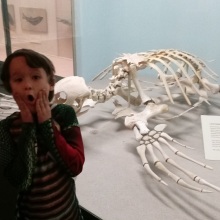 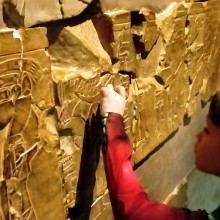 The museum was educational and very hands-on.  Erik learned a lot and chatted about his visit all the way home.  He even picked up some pamphlets to share what he had seen with his brothers.

We had been going strong with our boatschool and decided to take the week of Thanksgiving off.  John still had to work a few days during the week, so the boys and I agreed to do some Thanksgiving themed projects to keep us busy during the week.  Each of us had a topic that we would research, make a powerpoint presentation, and have a craft or snack ready that everyone would participate in making.  We all had an assigned day to present.  Liam researched and presented the Mayflower.  Glen’s topic was corn.  Erik learned all about turkey, and I presented on the Wampanoag.

During the break we also had some time for self-portrait day.  This was a fun undertaking, and Liam helped us all out by giving us some pointers that he had learned from a teacher at his middle school in Texas.

I was a little concerned about making a Thanksgiving feast in my small boat galley, but with the use of foil and timing, we ended up with a nice spread.  Our Shop-Rite grocery store was giving away free turkey if you spend x-amount of dollars.  We met the requirement, so I chose a turkey breast thinking that it would fit best in my tiny oven.  It was a tight squeeze, but it turned out perfect.  We also had sides and two pies…as well as plenty of leftovers.

A few days after Thanksgiving, we decided to decorate the boat.  There are sailboats that have lights up the mast, but we felt a little intimidated by that and chose to just go around the cockpit.  Liam and Glen did the stringing for us.  We all pitched in and made DIY ornaments out of recyclables that we had been saving for months.  We were very pleased with our aluminum can stars.  Our indoor toilet roll snowflakes were pretty, but we soon had a boat full of glitter from them falling into the kitchen sink all the time.  I guess we needed better tape to hold them to the ceiling. 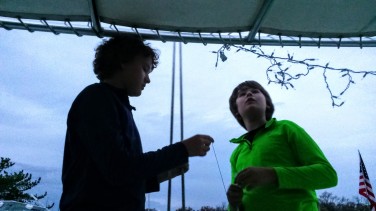 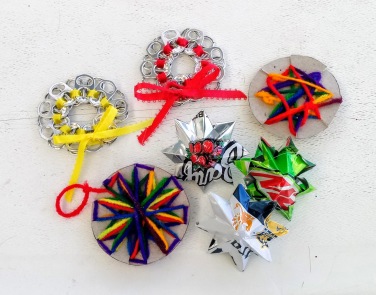 Varekai all lit up 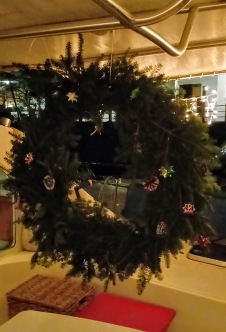 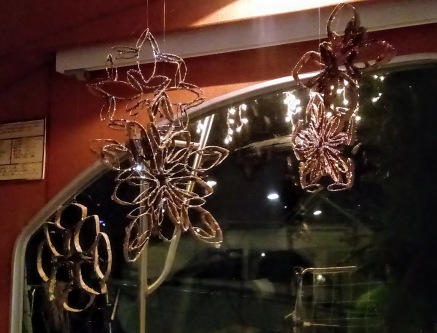 Since John was working in the Bronx, we thought we would spend a day out of the weekend exploring Little Italy in the Bronx.  He had heard good things at work about a couple of places to check out.  The nice thing about visiting the Bronx on Sunday is the free parking and very few people.  Our dock master had told us of an Italian restaurant called Dominick’s.  We got there a little early as they don’t open until 1 PM on Sundays, so we had a chance to walk around.  We found a butcher shop that had hanging sausages from the ceiling.  We were intrigued, so we went in.  The smell (something that we had never smelt before) became so overwhelming that we had to make a quick escape.

Our meal was delicious.  We tried a few of their most popular dishes and ate family style.  Erik was adventurous and tried some new things.  We all left stuffed, but not so stuffed that we didn’t want to visit the bakery where we got cookies and cannoli’s. 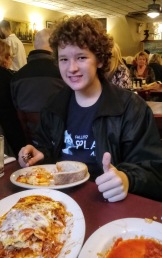 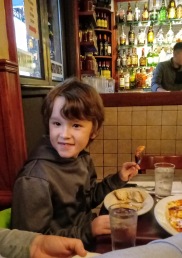 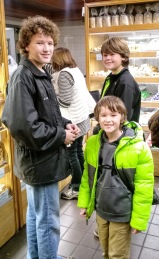 Our first snow came December 9th.  The boys were soooo happy.  This is the reason we had come to Connecticut for winter.  They played on the trampoline of the boat before venturing to the yard.  The snow came down big, fat, and quick.  Benny loved the snow, but Oliver wasn’t too sure about the cold blanket that he got lost in when he walked.

Glen is so happy 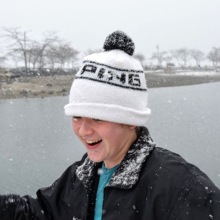 Liam getting covered in flakes

Oliver’s not sure about snow

The boat, docks, ramps, and yard were all covered in shin-deep snow.  We were extra careful walking the docks, but found the ramp (when elevated) was extremely difficult to maneuver.  That didn’t stop the boys from going up to the yard to build snowmen and having snowball fights. 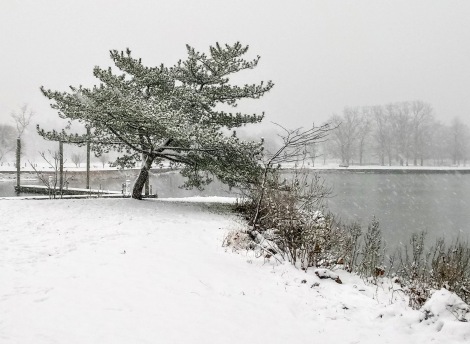 The yard filled with snow

Liam contemplating coming down the ramp

One perk of a snowy winter is an empty laundromat on laundry day.  Normally we would be competing for machines with the other patrons; however, we had the place to ourselves this particular day.

On December 16th, the water around the boat froze.  It wasn’t a very deep freeze, but it was a new experience nonetheless.  The frozen sheet didn’t last too long.  The sun came out and broke things up.  It was definitely a precursor to what was to come though.

The boys wanted to see the infamous Rockefeller Center Christmas Tree, so we found a free weekend and made the trek to NYC.  It was cold and crowded, and I don’t think the boys were as impressed with the tree as they had hoped they would be, but we had a fun time anyway.  It was festive and our first time seeing many of the buildings and Central Park.

We had just recently finished reading From the Mixed-up Files of Mrs. Basil E. Frankweiler, so some of the buildings really came alive for the boys.  It’s always so much fun to visit places that we have read and learned about. 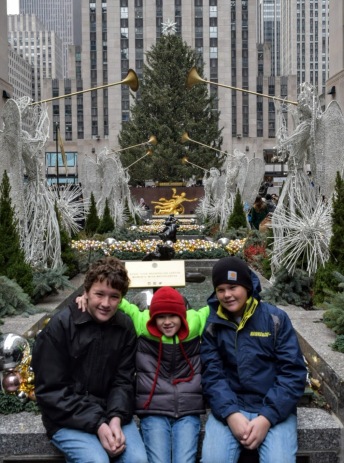 The boys in front of the tree

We had some visitors from Texas stay with us one night on their trip to NYC (I’m still kicking myself for not getting their family photo while on the boat).  We had decent weather and walked around a neighboring town and visited the Elm Street Diner in Stamford where they are known for their giant milkshakes.  We let the boys share one that they had picked out.  Sweet overload!!

We had a Mexican feast for Christmas.  We made tamales that the boys helped roll.  They turned out a ton better than I had expected.  I had made some in a previous year that weren’t so great.  Of all the food we had for Christmas, our tamales were the best.

Instead of Gingerbread Houses this year, we decided to build our own Gingerbread Fleet.    We made templates out of graph paper and tape, made the gingerbread dough and frosting from scratch, and built them on one of John’s days off.  Erik made a row boat, Glen and John made sport fishing boats, Liam made a houseboat, and I made our boat.  We had a blast, and the boys worked on eating them for the next week. 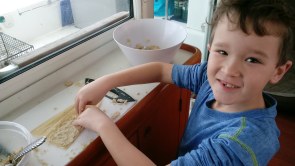 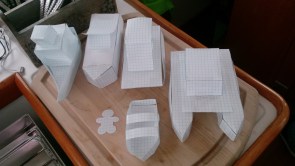 There was enough snow on New Year’s Eve for the boys to make an attempt at sledding.  Being that this was a popular snow hill, and walking distance from the marina, the snow quickly disappeared.  The boys could have cared less and were basically sledding on mud by the end.  But, like I said before, this is why we came to Connecticut for the winter.

The boys climbing the snow hill 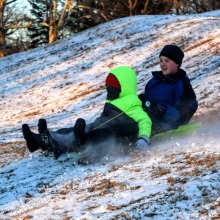 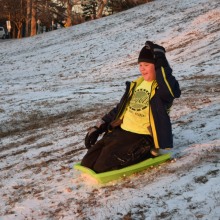 The moon was big and bright on New Year’s Eve over Varekai’s mast.  We couldn’t wait to see what 2018 held in store for our family adventures. 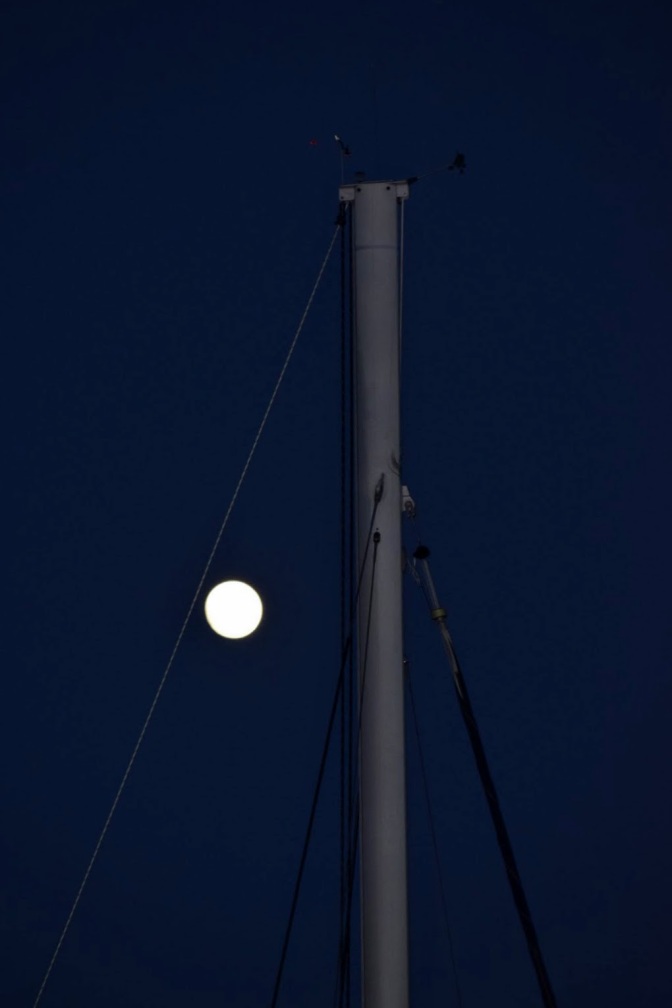