We left Norfolk on the morning of September 12, 2017.  We had plans to anchor at Smith Island, Maryland that evening.

It was a relatively uneventful trip until we got close to Smith Island.  It was starting to get dark, and the closer we got to the island, the more crab pots we came across.  It was like a maze as we weaved in, out, and around the crab pots.  We came to a clearing where we felt it would be safe to anchor.

There was a barge near the island that had some equipment on board.  It didn’t look as though it had been used in a very long time.  It wasn’t until the next morning when we were pulling anchor to leave that we noticed the equipment on board started to move.  Benny didn’t like the sounds coming from the barge and loudly told us what he thought.

The sail to Annapolis the next day was smooth.  We had a chance to check out the rigging on the top of the mast.  John thought it was time to replace the main line.  Zoom camera lenses come in handy for checking rigging.

We decided to practice winching John up the mast and letting him down slowly.  Our electric winch is on the port side of the boat, and we were needing to put him up on the starboard side of the boat.  So, this had to be done manually.

John hooked himself into the boson’s chair and held on while I manually winched him up the mast.  We didn’t do too much before making sure that we could let him down slowly.  We were so afraid that John would come down the mast too fast, so all the boys and I held the rope that was around the winch and let him down as slow as we could.  It went a lot smoother than I imagined it would go.

John ready to be winched up 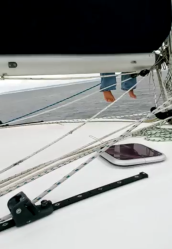 John slowly going up the mast

Releasing the line – the scary part

We approached Annapolis, the sailing capitol of the world, at 4:15 pm.  We picked up a mooring ball, #32, in the mooring field.  John let down the dinghy, and he and Glen went ashore to buy some new rope for the main line.  I had no idea that rope could cost $500…ouch!!

We had just enough time before sunset to change the line, and we were glad that we had practiced.  John got into the bosun’s chair, and we all got into our positions.  We had a lot further to hoist him up than our practice run.

Once John got past the mainsail bag, the winching got pretty difficult.  He was trying to help as best he could by monkeying up the mast, but I still had to take breaks from winching.  The boys weren’t quite strong enough to turn the winch, but during my breaks, they gave it a try.

Boats would pass, and most were going slow, but we encountered a couple that were going a little faster than we would have liked.  We would motion for them to slow down so their wake wouldn’t rock the boat, and one slowed, but the other boat thought we were waving.  John held on tight at the top whenever boats came by.

He changed the line as quickly as he could, and then we brought him down slowly.  He says that he doesn’t want to go up there anymore than absolutely necessary…too scary.

While we were stationary, we decided that it would be nice to take the dogs ashore and let them walk around and do their business on land for a change.  They did a good job getting in and out of the dinghy.

We had a pineapple that needed to be eaten, and Glen offered to cut it up for us.  He, however, decided to carve most of it into a Mahi-Mahi.  He did a really good job and was pretty proud of himself.

We left Annapolis the next morning.  There was quite a bit of boat traffic as we traveled.

I didn’t notice until I was looking at my camera roll that the captain of this sailboat was looking through binoculars.

We passed by this ship, the Palanca Luanda, which is an Asphalt/Bitumen Tanker weighing 14, 911 tons.  It had a pretty nice life boat on the back.  We were really impressed by the amount of water that the tanker pushes out in front…like a wall of water.  I would sure hate to be caught in the wake of that boat!

We entered the Chesapeake & Delaware Canal and noticed that the land became more hilly.  There were interesting communities along the shore.

There were several fixed bridges and one lift bridge that was in the up position.

We entered the Delaware Bay and noticed the Salem Nuclear Power Plant at around 4:45 pm.  The power plant is in New Jersey on the port side of the boat, and Delaware is on the starboard side of the boat.

Erik, our picky eater, has become more adventurous about trying new foods.  Here he is eating spaghetti…and deciding that it is actually pretty good.  He now eats spaghetti every time we have it for dinner.

We continued on towards the Atlantic.  We passed many lighthouses along the way.

We finally made it to the pass at Cape May, NJ.  We stopped for fuel at Mill Creek Marina before making the next leg of our journey.  The man that refueled the boat couldn’t help us with an anchorage, so we decided to just continue on toward NYC.

While we were refueling, Liam and Erik walked the dogs, and Glen took out the trash.  Glen was approached by two elderly couples who had been eating lunch at the restaurant across from the fuel dock and watched as we docked.  They had gotten into their car and come over to the dock to talk with us.  They had many questions and were very interested in our journey.

As we left Cape May, we noticed that there were people enjoying the sun and sand on the beach…even in the cooler weather.

We passed Morey’s Pier.  It looked like a fun place.

Later that evening we passed Atlantic City.  I was actually sleeping while John was on watch as we passed.  We had plans to continue until we got to NYC and anchor near the Statue of Liberty, but that is for another day.

Me:  What was your favorite thing about this part of the trip?

Glen:  Staying up with Daddy and seeing Atlantic City.  I really liked the sailor’s shop in Annapolis.  It had antique sailing equipment…like on Pirates of the Caribbean.

Erik:  I liked seeing all the lighthouses and buoys.  The lighthouses were really big with cool colors.  I liked to see the birds on the buoys.  I couldn’t hear it, but Mama says that the buoys have bells to warn you that they are there.

Me:  What was your least favorite thing about this part of the trip?

Liam:  I didn’t really have a least favorite thing.

Glen:  I noticed that my room was becoming more damp.  The condensation would drip on me.

Erik:  I enjoyed everything about the trip.

Liam:  I thought that Glen did a really good job carving the Pineapple Mahi-Mahi.  It also tasted good.

Glen:  I would like to visit Atlantic City one day.  It looked cool.

Erik:  I really liked seeing all the lights of Atlantic City.  There were so many colors.

4 thoughts on “Annapolis and the C & D Canal”