On August 27, 2017, we sailed from Bimini, Bahamas to Fort Lauderdale, FL.  The sail was short and packed with boats traveling to and from the Bahamas.  The closer we got to Fort Lauderdale, the more and more boats we encountered.  Big boats, small boats, fishing boats, sailboats, cruise ships, container ships, etc.

As we entered the pass, we had a very large container ship behind us.  Our speed was so slow that we ended up pulling over to the side of the channel to let the ship pass.  We had to be really careful and watch for fellow boaters.  It seemed that everyone believed they had the right of way regardless of rules.  In fact, we nearly got run over by a female driver on her cell phone.  Despite her size, which was no bigger than our boat, she never saw us.

After a short time, we came to a bridge.  We were definitely too tall to go under, so we looked up the bridge schedule and found that the 17th Street Causeway Bridge opened on the hour and half-hour.  We had about a 20 minute wait until the next opening.  When the bridge opened, there were several other boats waiting to go through as well.  We followed a boat that was identical to ours.

We searched for a good place to anchor, but instead found several vacant mooring balls across from Las Olas Marina.  We picked one up, we’re pros now, and called up the marina to let them know that we would be staying for a few days.  They told us to come over to the office to pay and pick up a shower key.  But, we had one thing on our mind…getting our pups!

It had been a full month since we had seen our dogs.  The boys were REALLY missing the dogs, and there were many times on our trip that we had said something along the lines of, “I bet Benny and Oliver would like this beach” or something similar.  John contacted the dog sitter, Mik,  who agreed to bring the dogs and our truck to us.  So, we parked the dinghy at the marina and started walking toward the meeting spot…a restaurant nearby called Coconuts.

On our walk it poured rain.  We were soaked by the time we got to the restaurant, but luckily, Mik was already there.  The dogs went nuts when they saw us.  We all crammed into the truck, with Mik driving, and headed back towards his home to drop him off.  Liam, Glen, Erik, and I were in the backseat holding Oliver.  John was in the passenger seat holding 100 pound Benny!!  The truck was also packed with things that we were going to put on the boat but didn’t take on the plane with us.  It was tight!  When Mik exited the truck, we felt like we had all the space in the world.

Also on our list was checking back into the country.  John was able to do most of this by phone, but the boys and I had to visit Customs and Immigration with our passports and papers from our trip.  It wasn’t too far from Mik’s home, so we visited as soon as we dropped him off.

We spent the next few days helping the dogs get acclimated to the boat.  Oliver picked up on things pretty quick, but Benny had a hard time understanding inside versus outside the boat.  It didn’t help that it was so incredibly hot during the day and even into the night.  The dogs ended up sleeping outside on the deck to catch the little bit of breeze that came through the big buildings.

John and Glen took the truck and picked up our things from storage.  It, surprisingly, only took one truckload and fit into the boat easily.  It felt good to have some of our nicer things from home…like silverware.  We quickly got rid of a lot of the rinky-dink kitchen supplies that came with the boat.

From our mooring, we saw beautiful sunset after beautiful sunset.  We spent our evenings sitting on our newly acquired bean bags enjoying the breeze and waving to the passing boaters.

On the eve of Glen’s 12th birthday, August 29, he decided that he wanted to sleep on a bean bag on the trampoline under the stars.  Erik wanted to join him.  The night was clear and the moon was bright.  It was so warm that they opted not to take any covers.  In the nights that followed, I think we all ended up sleeping outside at least part of the night trying to escape the heat of the boat.

The next day, August 30, we spent celebrating Glen.  He wanted to have lunch at Outback and ice cream at Cold Stone.  We sang happy birthday to him in our best Arnold Schwarzenegger voices at the top of our lungs.  He loved it!!

John ran some errands and picked up the mainsail that he had taken for repair.  While he was gone, the boys and I decided that boatschool should begin. We didn’t have any Wi-Fi at this point, so I just made up some review papers for the boys to get their school brains working again.  They may say differently today, but I think they enjoyed getting back on a schedule.

Another hot day was around the corner.  At this point we were really looking forward to heading north into the cooler weather.  Even the dogs were tired of the heat. 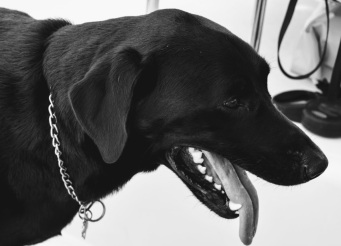 Before leaving Fort Lauderale, I made the executive decision that we had to eat at Mellow Mushroom (our favorite pizza place) which was not too far from our location.  We had a few errands to run, like picking up some new (extremely expensive…WOW) rope, so we squeezed in lunch.  The pizza is good, but I go for the Greek Salad…so good. 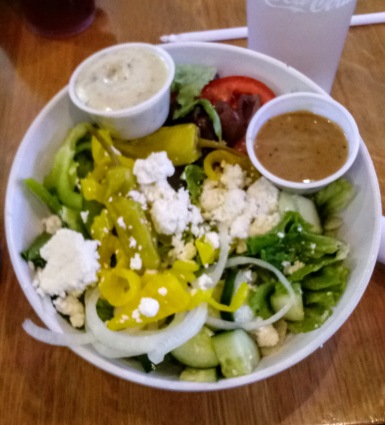 Erik and the Mushroom

While John was at a CPR class the next day, the boys and I spent time playing board games, making funny videos, and having drawing contests.  There was also a lot of outside time with the dogs. 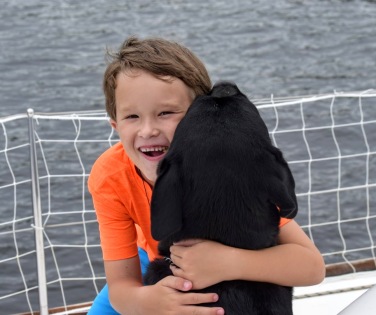 We took their “school” photos for the year as well.  We decided that the view around us was pretty and we should take advantage of that for our background.  Each boy picked where they wanted to sit or stand on the boat for their photo.  The sun was bright, so they are squinting a little more than I would like, but I think that the photos turned out really well.

It was nice to stop in Fort Lauderdale to get our dogs and storage items, get our mainsail repaired, visit a laundromat, and have some off-boat meals.  But, we were definitely ready to move on to cooler weather.

My trip from the Bahamas to Florida. When we got to Florida, we went under the drawbridge. It was so cool. I heard the bell for it to open, and it was so loud and annoying. After we got through the bridge, we went to a mooring ball. We got in the dingy and went under another bridge and to a dinghy dock. We got the truck and the dogs then Glen and Daddy went to get the storage. We saw a million yachts and hotels. It was Glen’s birthday, so we went to Outback. Instead of a cake, we went to Cold Stone and had ice cream. It was very good.

When we got to Florida we went through a drawbridge. It seemed like everyone was a brazillonare, because there was a giant mansion that you could mistake for a hotel with a pile of super yachts on the canals. There were nice people, but the majority of the people were kinda rude. We pulled into a place where we got a mooring ball. We were so excited because we thought we were going to get WiFi and all that. Well the WiFi was down, but we were going to get the dogs and all our stuff! We took our dingy into the dingy dock. The dog guy picked us up then we went to his house. Later Daddy and I went to get all the stuff from storage. The boat was so neat until the boxes came. When we went to get the second load, the dingy popped. We got a patch that didn’t work. My birthday was on a weekend so we went to Outback and Cold Stone. It was really good.

We were coming into Ft. Lauderdale, and there were a lot of boats. Most of them were super-yachts, but there were a few small boats and dinghies. While Glen was going to the bathroom, a small sport fisher with the name “Mahi Madness” came cruising by. We yelled for him to come see, because the Mahi is his favorite animal, but he was too slow. By the time he got to the deck, it was out of sight. There was a big drawbridge on the way in, and we had to wait with a bunch of other sail boats for the bridge to open. When we got in, we found a spot with a mooring ball right next to the bridge, and took the dinghy up to the dock master. We met the dock master in a large building with really cool air conditioning. We bought a spot to stay for one week and went back to our boat. Afterwards we went to go get the dogs, checked into customs, and went to get our stuff from storage. The next day we loaded up on stuff from the grocery store. My dad and I, at the end of the day, tried to get takeout Mexican food from a restaurant, but they weren’t open. So we ended up going to a pizza place a little farther down the street. We got a pepperoni pizza and a vegetable pizza. A few days later, we went to a restaurant we hadn’t been to in a few years. Mellow Mushroom. It’s a pizza place with WiFi (everyone liked that) and really good food. We also celebrated Glen’s birthday by going to Cold Stone. We all got our ice cream. Before we left, went to the bathroom. When we got in the car, Glen was still in the bathroom. We waited for him to come into the car, and the second he shut the door, we screamed Happy Birthday in our Arnold Schwarzenegger voices, into his ear. He “loved” it. One day, our dad had a CPR class, and while he was gone, we made a bunch of funny videos. We also started Boat School. Yay.