August 7, 2017 started out as a beautiful day.  We got up early and headed out from Soper’s Hole, BVI towards St. Thomas, USVI.  We had provisions to last us a few days, semi-full water tanks, one full propane tank, a grill with a fresh bag of charcoal, and everything was in working order on the boat…for the most part.

The waves turned out to be a little bigger than what we had anticipated but nothing we couldn’t handle.  In fact, the trip was going so well that we decided against stopping in St. Thomas and instead headed straight for Fajardo, Puerto Rico.

Little did we know that there was a Tropical Wave headed our direction.  That wouldn’t have been too bad…just big rolling waves.  What made this trip so terrible was the storm that came along with the Tropical Wave.

For awhile, John and I had to go inside the cabin as we traveled due to the height of the waves.  There were moments when we thought that the waves would come up over the back of the boat.  The boat has a tendency to twist sideways when it hits big waves making our stomachs churn…much like a rollercoaster.  Erik’s snorkel mask decided to jump off the back of the boat into the high winds.  We thought we would keep that a secret, but Glen decided to tell him.  That was one upset little boy 😦 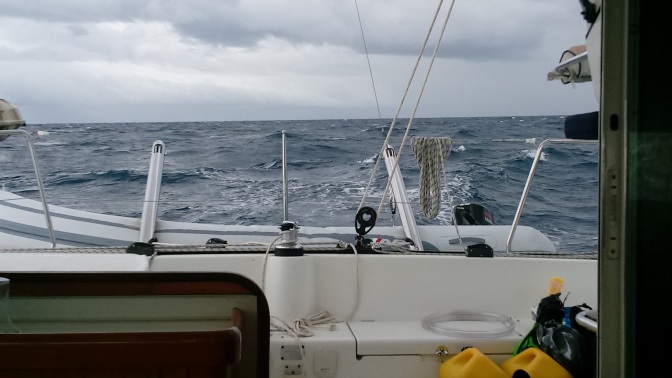 Just outside of Fajardo, the winds and waves were so bad that John decided to take the sails down.  He was having some trouble with the mainsail and had to go up onto the top of the boat to manually pull the sail down.  With the weather the way it was and the fact that we were rocking so much, I just knew that he was going to go overboard.  I had never experienced anything like this (and never want to again).  He managed to get the mainsail down minus the sail being completely in the bag.  Who cares!!  We can fix that later.

Back on course and closer to our destination, the Pan Pan calls started coming in over the radio.  One call after another of people getting into trouble on the water and needing help.  We were feeling lucky at this point.

As we got closer to our anchorage, the sky started to clear.  We were feeling a little better.

Our first anchorage turned out to be a bust.  Darn…I was hoping we could be done with this trip!  We decided to to head towards the mainland and found an anchorage with several other sailboats.  We anchored successfully and set the anchor alarm.  Everyone was so mentally exhausted that evening that we all slept well.

Luckily we had anchored where a ferry made runs from the mainland to an island condo several times a day from early morning to late evening.  John and Liam took the ferry to the mainland for propane and to check in with customs.  Later that day, a customs officer came out to the boat to see who else was on the boat…I guess that’s customary.

We decided to just stay in Fajardo for a couple of days to recoup from our trip.  We played a lot of cards and did a little work on the boat.  We used our Rain Man Water-maker for the first time.  It took awhile to make the water, but it was nice to have two full water tanks and fresh drinking water.  I made an attempt at curtains, but with the humidity, the Velcro didn’t stick to the fabric.  Oh well…it was a nice thought. 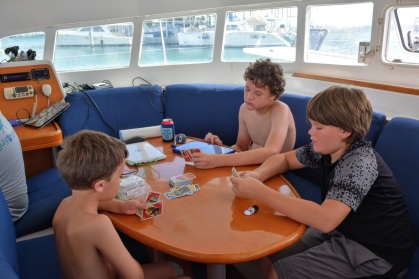 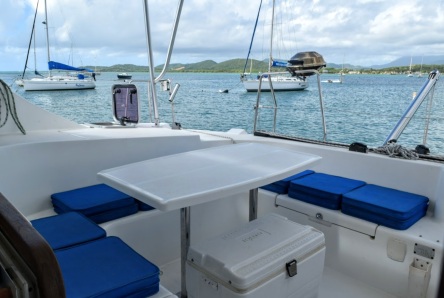 The next day we went back to the spot where we had originally tried to anchor.  It was supposed to be a good snorkeling spot.  When we arrived, there was a giant catamaran there with close to 100 people on board.  It was a snorkel boat.  We anchored near them and the boys quickly got in the water.

Glen swinging off the back of the boat.

Glen splashing in the water.

Erik swinging off the back of the boat. 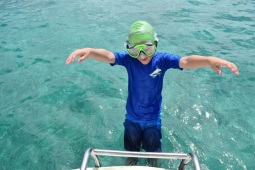 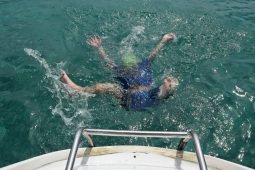 Erik falling in over and over. 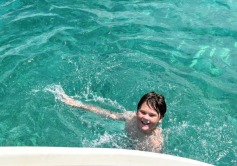 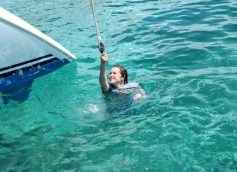 There wasn’t a ton of sea-life, but the water was clear and warm with a rocky bottom.  The boys had so much fun jumping off the boat and swinging from the ropes.  John grilled hamburgers, and we stayed there for the majority of the day just relaxing. 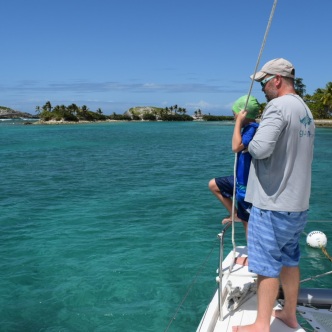 Erik about to leap. 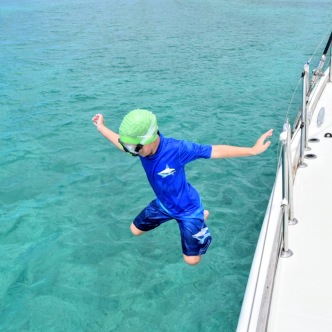 Erik jumping off the side. 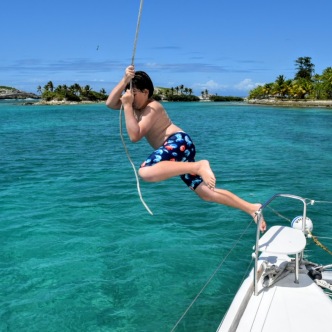 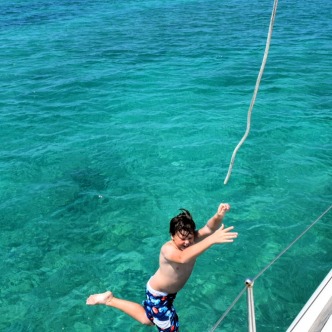 We went back to our anchorage for the night.  Our travels to San Juan were scheduled for the next morning.

My trip from Soper’s Hole to Fajardo.

I went in a horrible storm.  I lost my snorkel mask.  The waves were 12 feet big.  It went over the boat.  I was very scared.  I got to Fajardo.  I rope swinged and hit the boat.  I hit the net.  It really hurt.

Our trip to Fajardo was rough. Going there was ok till Erik lost his snorkel mask. I came in to tell him. When I told him, he started crying and before you knew it we were in a storm and everyone started freaking out. Liam was still in bed and I went to talk to him. We heard some people on the radio calling ‘pan pan’ which means a distress call but not going to die. It was stuff like their boat was sinking in a bay, or there anchor line snapped, or they lost there compass and stuff like that. We anchored in some place where the ferry was going by us so we used it to get groceries. We left one day to a island and we used a rope to swing off the boat. Erik insisted on going first but when he jumped off he didn’t let go and ran into the side of the boat. I tried not to laugh but I couldn’t stop laughing. He was trying to hang on to the side and everyone was trying to help him up but I said just to let go and he hasn’t done the rope since. The water there was so clear it was like 12 feet deep and you could see everything. Later we made burgers then went back to the anchor spot. We got in to our beds and fell asleep.

The trip to Fajardo was anything but enjoyable. We had bad timing already, considering the fact that we were sailing during hurricane season, but it didn’t help that we had a tropical storm to beat. I don’t remember much from the trip, because I was asleep most of the time. I was awake for the beginning of the trip, though. There weren’t waves, really, just swells. Apparently, while I was sleeping, Erik’s Scuba Mask, which was 30 some-odd dollars, flew off the boat.
When we got to Fajardo, Dad and I went into town. In the first few minutes, we met some people who stuck with us the whole time. The people helped us get a taxi, met us at the store, and told us where to get propane. They were really nice.
While we were there, we didn’t have much to do… time for swimming! We swam around the boat for a while. We got a rope out that was tied to the mast, and started swinging off the boat. It was pretty drastic. Erik forgot to let go and hit the side of the boat, and Glen and I both had trouble with the rope too.
That’s all I remember about our trip to Fajardo.