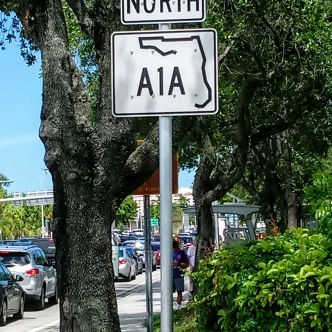 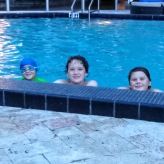 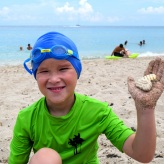 Our Trip from Seabrook to Fort Lauderdale

with the boys’ views at the bottom.

We left our home in Seabrook, Texas on July 26, 2017.  We packed up our F-150 and a small U-Haul trailer, penned the dogs in the bed of the truck, and headed out towards Fort Lauderdale, Florida.  We made two overnight stops along the way that went surprisingly well despite the fact that we had five people and two dogs sharing one room.  And, after an escape attempt by Benny, the dogs ended up riding inside with us right before we reached our destination.  Our on the road meals consisted of bucket after bucket of fried chicken which we still make jokes about to this day…nobody wants fried chicken anymore.

After dropping the dogs off with the sitter, Mik, we went to our storage building and unloaded the U-Haul.  We now call John Pac-Man due to the fact that he fit all of our belongings into a 4′ x 5′ storage locker…I still don’t see how this was possible.

We found a nice hotel with a pool and spent the next few days playing.  We had a fun meal at Primanti Brothers Pizza…a new favorite, and the boys played in the hotel pool until the sun went down.

We made our way to A1A in Fort Lauderdale only to be stuck in traffic due to the Super Con Convention going on at the Fort Lauderdale Convention Center.  It was quite entertaining watching the characters walk by in their costumes.

The weather was beautiful at the beach, and we found a section that wasn’t so packed with people.  The boys quickly made their way to an opening and started digging in the sand.  The water was some of the clearest that I had ever seen…not what I was expecting.  I did not come prepared in a bathing suit, but after watching everyone having so much fun, I decided just to swim in my sundress.  The water was inviting, you could see the bottom, and we were surrounded by fish and shells.

After our beach fun, we stopped by a laundromat (a new experience for the boys) to clean our belongings in preparation for our plane ride.

A couple of nights passed and it was time to move hotels in preparation to board the plane.  We stayed at a hotel that was directly across the street from the Miami airport.  After dropping us off at the hotel, John drove the truck back to Mik’s house, and took a train and a shuttle back to the hotel.  The boys and I spent those few hours playing games and making funny videos to pass the time.

Everyone went to bed excited for what the next day held.

Erik – “The trip from Seabrook to Fort Lauderdale, we took the truck.  It was like we had a minivan.  The dogs went in the back.  And, sometimes the dogs rode in the front with us.  The dogs stayed in a guy’s house for a little bit.  And, we went to a beach.”

Glen – “We drove a truck from Houston to ft. Lauderdale. We stopped at motel 6es with two dogs in the bed of our truck. I mainly crochet the whole way there. Our truck was jam-packed, but there wasn’t too much traffic. We each had two backpacks one for toys and personal items and one for cloths. My personal item bag was full of yarn, electronics, toys like yoyo’s and Rubik’s cubes and stuff like that. At our first hotel these mean people threw ice at us and our bathroom door didn’t shut. So we got up in the morning walked the dogs and got in the truck and drove off. We got in a little bit of traffic but I wasn’t that bad the bad part was the country music which usually doesn’t bother me but for some reason it did on that trip. That day we got to Florida and ate at subway. We stopped at a motel 6 for the night. The next day we were in ft. Lauderdale. We dropped off the dogs at a dog sitter and stayed at the sawgrass grand. And went to this place called primanti bros and ate pizza. The next day we went to the beach. Most of the time we were there I was looking for coconuts. Then at the end I didn’t get one coconut I saw one and ran to get it. I wanted to cut it open but forgot it in the car. after a couple days we went to a hotel called the red roof grand that had an awesome TV. And in the morning we went to the airport.”

Liam – “The trip from Houston to Ft. Lauderdale was pretty interesting. The trip started with a truck ride. Our dogs, Benny and Oliver, sat in the bed of the truck. Benny was a black lab, and he was really hyper. Oliver was a mix between a chiwawa and a doxon. we called him Smalls. At the Houston house, Benny and Oliver had a little bed, that was a big, white, cage. It had an open top, so Benny wouldn’t hit his head when he tried to stand up. They had a nice big blanket to sleep on, and really the only reason they had to sleep in there, is because Oliver would chew on the little floor panel that stuck up from the ground. We all had something to keep up busy/sane during our road trip. Erik, the smallest, had his phone, which makes sense, because the scenery was mainly grass. Glen, the middle, crocheted a scarf. He started his scarf in Texarkana, at our visit to our grandma’s [who we called Noni] which was only a few days before the journey. By the time we started, it was all ready a foot long, which is impressive for two to three days. I was also on my phone the majority of the time.

Our truck was nowhere near fancy. There was trash piled up on the floor, dried gum stuck to quarters in the door handles, there were mysterious stains on the tan leather seats. It smelled strangely of gummy bear residue. All of the kids, including me, squished together in the backseat. The parents sat up front.

It was hot outside, but luckily our truck’s air conditioning still worked, even though it made a click, click, click, sound. I was sitting in the middle of Glen and Erik, and normally that would mean Erik would be trying to slap Glen from the other side, or vise-versa. But the trip was actually, surprisingly calm. Erik was busy on his phone, killing zombies and such, while Glen was intensely crocheting.

At some point during our venture, we stopped at a Dairy Queen to get ice-cream. Glen, Erik and I got Blizzards, while Mom and Dad got a chocolate, vanilla ice cream cup. While we were there we also took the dogs out to do their duty, so to speak. I think more than half our time waiting there was for bathrooms. Erik took forever.

We stayed in a few Motel 6’s, because they were the only ones in the area that allowed pets. our first one, a six to seven story motel, was pretty awful. when we got there, a bunch of unruly kids were throwing ice at us from the third story. we just walked by with our dogs, into our room. It was nothing special, just a normal room, but at night the dogs would not sit still. The room also only had two beds, and a 13 year old, 11, and 7 year old are not going to be sleeping in the same bed. So we bought a cheap air mattress, and Glen slept on it first. There was some complaining between Erik and Glen about the air matress, but I wanted to sleep on the bed. Not a balloon.

Our next motel was right up on the top of the “awful list” with the first. It wasn’t filled with unruly kids like the last one, but there was a lady who smoked right outside our window, and she talked a lot, all night. We got into the motel and when it was time for showers, we found a problem. One of the beds, the one that our mom and dad were sleeping on, blocked the bathroom door from closing.

While we were staying at the motels, our breakfast was a cheese danish, and dinner was fried chicken. Lunch, we sort of just went and ate out.

Soon after that, we made it to Ft. Lauderdale. We stayed at a nicer hotel called Sawgrass Grand. They didn’t allow pets, but we had left the dogs with a dog-sitter. Sawgrass Grand was awesome. It was cheap too. [yay!] We were sitting, trying to watch Fast and Furious 7, when Glen and I were told to go get ice. We didn’t know that there was an ice machine in the hall, so we went to ask the lady at the concession stand. we waited for a while, because an old lady was ordering six to seven lattes. But finally, when it was our turn, the concession lady looked at us with a blank face, and then said, “did you see him?” Glen said who she meant, and she said,”well if he doesn’t want it…” she shrugged her shoulders. “Do you two want a frappuchino? I’d hate to waste it.” So we took our free frappe’ and set off back to our room.

After that, we stayed at one more place, Red Roof. Red Roof was a really tall hotel located right next to an airport. [yay…] But our room was almost as good as Sawgrass. One of the biggest pluses was the fact that there was a vending machine on the same floor as us.

So that’s my point of view on our trip from Seabrook, Texas, to Ft. Lauderdale.”